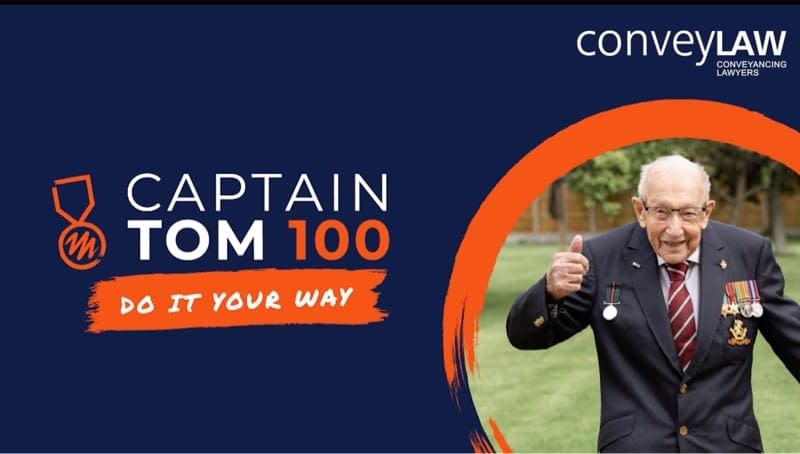 Staff At Convey Law Raise £10,000 in Memory of Captain Tom

STAFF at leading conveyancing practice Convey Law have raised an impressive £10,000 in memory of Captain Sir Tom Moore to celebrate what would have been his 101st birthday.

They raised £5000 by taking part in the Captain Tom 100 Challenge which was matched by Convey’s charity arm, the Conveyancing Foundation, with a further £5000 donation to NHS Charities Together.

Thousands around the UK took part in the 100 Challenge over the Bank Holiday in honour of the veteran fundraiser who inspired the nation with his original 100 laps of his garden.

At Convey Law, staff and their families and friends pledged to raise funds by doing 100 of whatever they liked over the long weekend. Completed pledges included 100 minutes of walking, running, mountain biking, dog walking, hiking, plastering and decorating, picking up litter and even 100 one-armed push-ups!

Others pulled 100 pints, did 100 minutes of painting, baked and shared doggy treats with canine friends, read 100 pages of Harry Potter and one completed 100 minutes of voluntary work with an elderly person.

Captain Tom’s family are carrying on his work through The Captain Tom Foundation. They have decided to donate money from the 100 Challenge to mental health charities because so many people have suffered during the pandemic. Charities including The Mix, Place2Be and Young Minds will benefit.

“We were delighted to send funds both to the 100 Challenge beneficiaries and to the NHS.

NHS staff have worked tirelessly throughout the pandemic and we are grateful for the opportunity to give back and to be able to commemorate the efforts of Captain Tom.

“We have been able to make this donation thanks to the funds raised from our innovative Conveyancing Foundation Free Legal Fee Competition where clients make a £10 donation to charity at the end of their transaction, entering them into a monthly prize draw to win £500 towards their legal fees.

“We have helped law firms set up the competition and we would encourage others to adopt it and raise money for their chosen charities. Please do get in touch here,”

Posted in Articles, Conveyancing News | Comments Off on Staff At Convey Law Raise £10,000 in Memory of Captain Tom