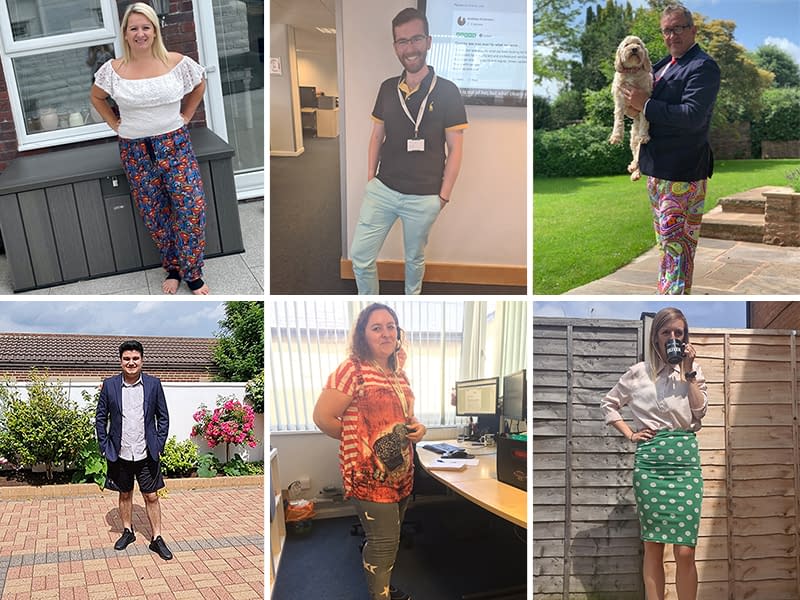 Specialist conveyancer Convey Law has donated £1000 to Bristol Children’s Hospital after its staff joined thousands nationwide dressing up in their wackiest legwear to support Wallace and Gromit’s Wrong Trousers Day.

Sporting colourful and outlandish flares, trousers of all descriptions, shorts and even pyjama bottoms, staff including Managing Director Lloyd Davies, who was resplendent in Austin Powers style flares, took the opportunity to raid their wardrobes in aid of the national charity event on Friday 2 July.

Convey Law staff working from home and in the office took part and shared their photos across social media to show their support for the event which was set up in the name of Bristol-based Aardman Animations’ Oscar-winning Wallace and Gromit characters.

“We have a fundraising culture at the heart of Convey Law meaning we regularly come together to support national and regional charity appeals and events. We find this is not only beneficial to the charities we support but also valuable for staff morale and wellbeing.

“Wrong Trousers Day came at the end of one of the busiest periods in conveyancing history with the Stamp Duty holiday officially ending at the end of June so it was a fantastic chance for staff to come together, have some fun and raise funds for an incredible charity.”

Funds from Wrong Trousers, which is part of the Bristol Children’s Hospital Grand Appeal established in 1995, support sick children and their families from across the entire South West who are helped by the hospital. Pioneering research, life-saving equipment and family accommodation and specialist support staff have all been funded by the Grand Appeal since its inception.

Bristol Children’s Hospital covers the single largest geographic area of any children’s hospital in England, with many of the brave children treated having to travel hundreds of miles from Cornwall, Devon, South Wales and Wiltshire for the hospital’s lifesaving treatment.

Lloyd Davies added: “We cannot think of a better cause to support at Convey Law than one which supports sick children and their families through the toughest of times.”